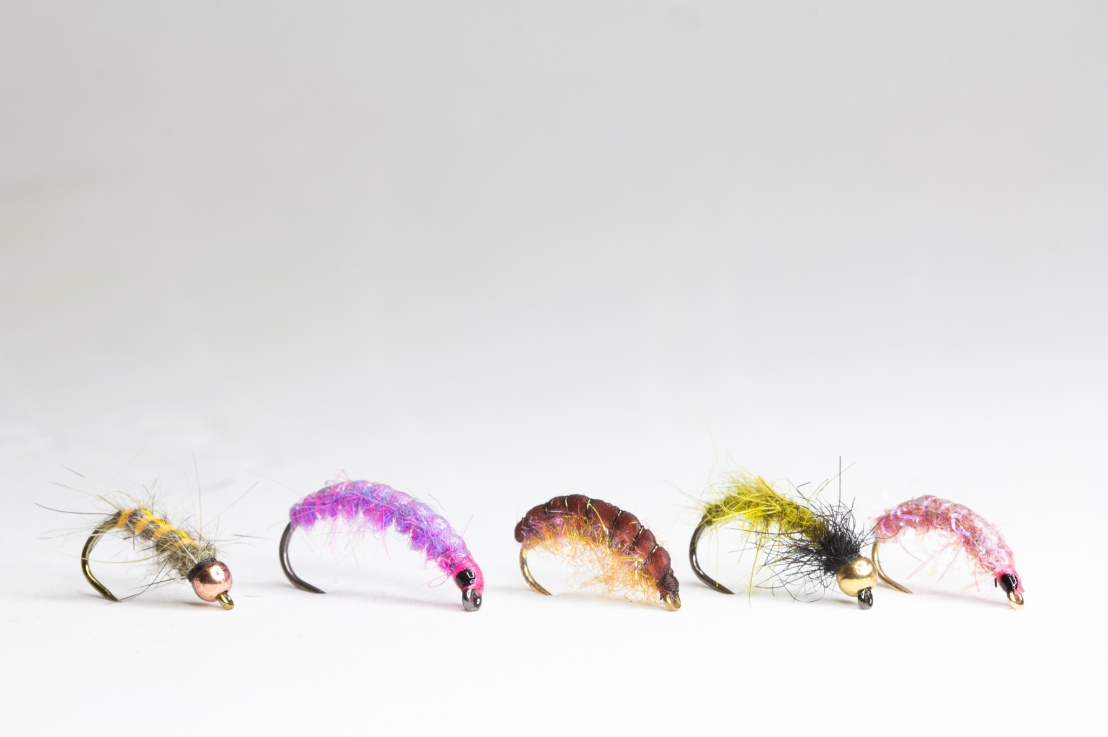 If you’re looking to target the ‘Lady Of The Stream’ then you need these proven patterns in your fly box!

When it comes to fishing for grayling it really isn’t that difficult, however arming yourself with the correct flies makes catching them a whole lot easier!

I have been fishing for grayling for over three decades, I started as a teenager on the River Teviot in Scotland. But really it’s been since the year 2000 that these things have pretty much taken up all of my winter fishing time. I love them and I get a real thrill catching these stunning creatures. You will too, grayling fishing is addictive and fishing in the winter months is often the best time to catch them.

There’s been a lot of things written about how to ‘target’ these fish so I won’t go into that just now. I want to look more closely at some of the my own popular patterns which I use to catch them. These are the flies that I keep on coming back to time and again year after year, in other words ‘favourites’.

Now, in no particular order I’m going to go through them giving credit where credit is due and explaining why each one is particularly effective.

If there is one fly that is synonymous with grayling fishing through the winter months then it has to be the Pink Shrimp.

The original fly, I am led to believe, came from Welshman Tim Hughes. Tim, he’s a friend of mine and an exceptional fishermen, not just fly fishing you understand but all kinds of angling, he loves it. It’s an old pattern now, well over 20 years old and yet we still keep coming back to this simple little fly. Looking in any Grayling angler’s fly box and Pink Shrimps will be there. Grayling LOVE pink!#

We will all have our own particular time but the one I favour is tied with pink and UV Straggle String.

Tied on a grub hook in sizes 8 down to 14 with lead wraps underneath Straggle String up the body and then a shellback of your choice I prefer clear, then a clear mono rib, it’s an easy tie.

You can see that it’s a simple fly but one it is one I wouldn’t be without.

The Pixie is a fly that’s been made famous by the Dixons these three anglers, Martin, Mike & Phil seem to make this fly work for them time and again on the Welsh Dee. They are all very handy anglers which also helps!

It’s basically a Hare’s Ear but with a few twist which make it even more attractive to grayling.

I tie my version on a Tiemco 2499, as I fish it with the bung, this hooks lends itself to this style of fishing.

The body is hare’s ear fur, the back is a thin strip of gold or chartreuse holographic tinsel on the rib is Glo Brite no.8, at least that’s the one I use.

The original was tied with the gold bead but I also tie this one with the fire orange bead, it pays to have options.

And so to another shrimp pattern, The Disco Shrimp.

This fly was invented by my friend Ben Bangham and I remember when I was editing the magazine, Ben and I did a feature on the River Test and it was there he showed me how effective this fly could be.

After I had shot the feature we shared his rod and we worked our way up a run and we managed to land over a dozen ‘big’ Grayling. I was sold on that particular fly from that day onwards.

But and I have to emphasise, this this is not only a chalkstream fly, not at all. This fly seems to work everywhere when it comes to catching grayling! I urge you to tie some. It’s tied on a grub hook, I prefer gold, a lead underbody. The dubbing is Hareline Ice Dub UV Shrimp & Orange Calibaetis mixed 70/30. The back is the dull side of original Nymph Skin and the rib is a medium green wire.

I’m pretty much happy to fish this fly the whole year through!

This is actually my own fly, but it was based on a fly shown to me by my good friend Tom McLeish up on the River Tweed. Tom’s pattern was tied using squirrel fur, basically a Fox Squirrel tied on a grub hook.

I never had ‘fox squirrel’ but I did have olive seal’s fur and so I used that instead. This simple little bug has worked for me all over the world not just for grayling but also for trout. it pretty much looks like a pupa, it’s pretty generic although it does bear an uncanny resemblance to the Ryach.

Again, with this fly I like to use a gold grub hook, I also incorporate a gold bead at the head. The body as mentioned is a golden olive seal’s fur, on the thorax area use any black dubbing. The rib is a medium gold wire with plenty of turns to secure the fur and make sure you pull the dubbing out with a good brush so it looks extra buggy.

The history behind this particular fly is mixed it but I believe it was first conceived by Alex Jardine, Although I may be wrong it depends on who you talk to.

My one, is a little different, I think?

This fly when it is in the water is so bright it is bound to attract attention. Stick a UV torch onto the materials and you’ll see what I mean, this thing glows!

The tying is a simple affair, again, a grub hook and a clear shellback and vinyl rib. I use a pink floss, I find Glo Brite no.2 best to finish the head, and a dab black varnish for eyes.

The body mix is essential to get right, for me anyway!

I use 50 /50 of Dave Downie’s Pimp Pink and Semperfli SYN0950, Sky Blue. Put these two colours together and BOOM, Death mix!

All of these flies work for me, and have done for some time, and like I said I keep coming back to them.

I hope that these flies work for you too!

If you would like a guided day on the river, targeting these awesome fish, or some of the flies highlighted above, then please get in touch..

Tie your own Pink Shrimp…

All About The Numbers Mate!

We fly fishers, are quickly falling into the numbers game. It’s inherent in most of us, we are hoarders, collectors, and boastful of things, not all, but most. Let’s start with the important bit, rods! It used to be, back ‘in the day’ that we owned one rod. This sturdy bit of cane, carbon fibre, […]

Fish Of A Lifetime, Time!!

four, five, six, seven, and even double figure trout are there to be targeted and caught each and every trip!

10 Top Tips For Success On Stillwaters

10 Stillwater Tips 1. Take It All In When you get to your chosen venue make sure you quiz the fishery staff as to what’s been happening. You need to know, flies, tactics, and how deep/shallow to fish the flies, but most important, are the areas. Check out other anglers, are they catching? If they […]

When the trout are up in the water, keep those flies just under the surface. In this Blog I share my favourite patterns and why I favour them for this style of fishing. In the past, November and December would be the ideal time to get out the fast-sinking lines and some weighted lures. The […]

The 5 Must-Have Grayling Bugs! If you’re looking to target the ‘Lady Of The Stream’ then you need these proven patterns in your fly box! When it comes to fishing for grayling it really isn’t that difficult, however arming yourself with the correct flies makes catching them a whole lot easier! I have been fishing […]

How To Tie the Red Holo & UV Diawl BACH

This is a great little nymph that works very well from May to September.

How To Tie the Nemesis

How To Create A Dropper

How To Attach A Fly To Tippet